Comments Off on Sheriffside 2012 season

This project aimed to add detail to the existing rectified aerial photograph (first recorded in the 1980s by the RCAHMS ) and to provide an assessment of the nature of the surrounding archaeological remains and a date for it. This involved the conducting of a geophysical survey and hand excavation of a two trenches , the first: Trench 2 measured 21m long and 0.5m wide and was deliberately limited in width to minimise the hand excavation of blank areas.

Where internal features like pits and post-holes were excavated it was extended and where deeper features were encountered it was stepped. The second, Trench 3 measured 1m by 1m and was designed to look for internal features in the enclosure.

The excavations failed to confirm the presence of the putative cropmark enclosure but did identify a terrace with associated platform and cut features such as postholes and rockcut channels – charcoal retrieved from the fill of one of the rock cut features dated to 2030 ± 30 or cal BC 110 – BC 50 (1σ) SUERC 35712.

The resistivity clearly showed differential features across the study area. There are clear results showing both the modern quarry dug into the western slope of the hill and the pump house. The plot clearly shows the circular ditches of the cropmark enclosure.

The outline of the enclosure as defined by the geophysical plot is clearly different to that of the rectified plot and it may be that the rectification aligned the wrong set of features with each other and translocated the position of the enclosure. 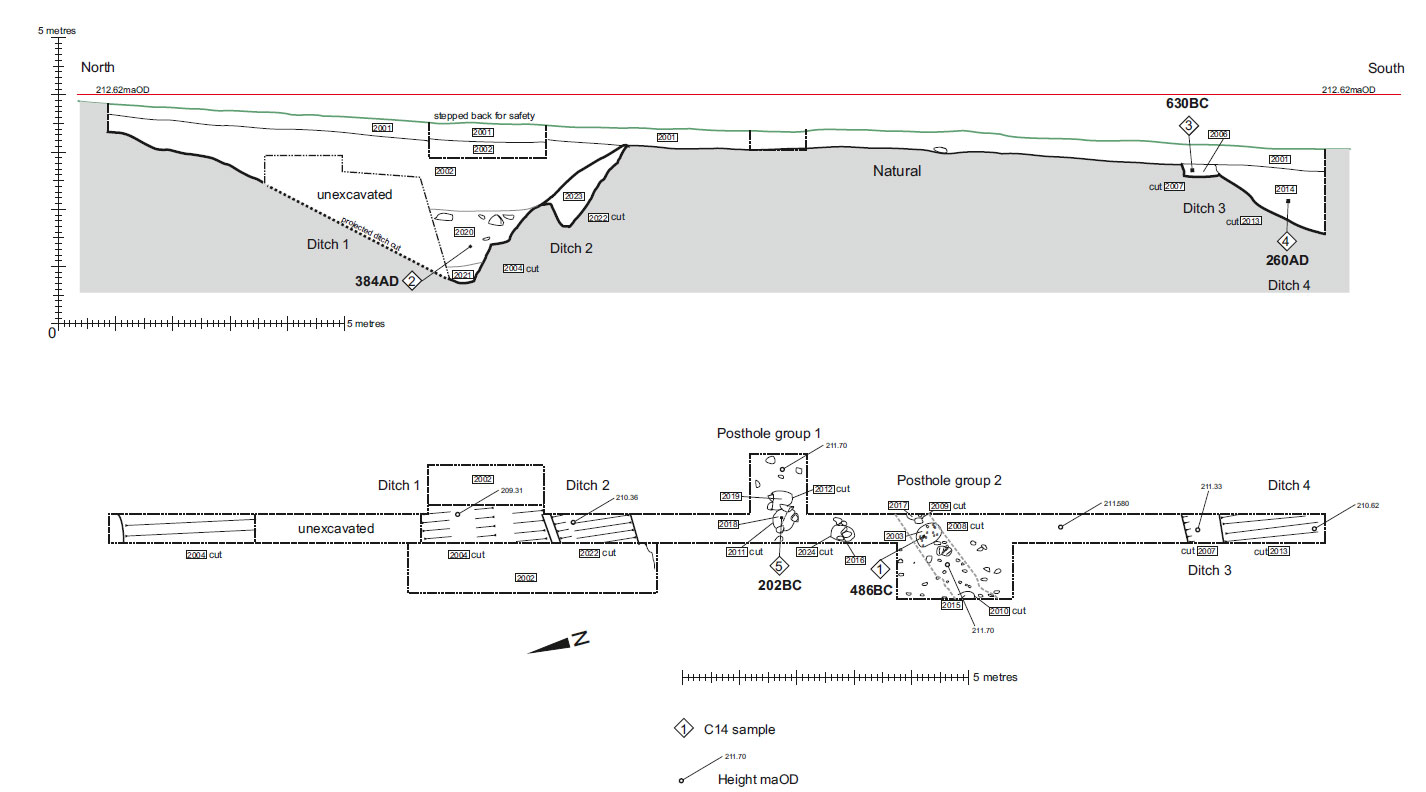 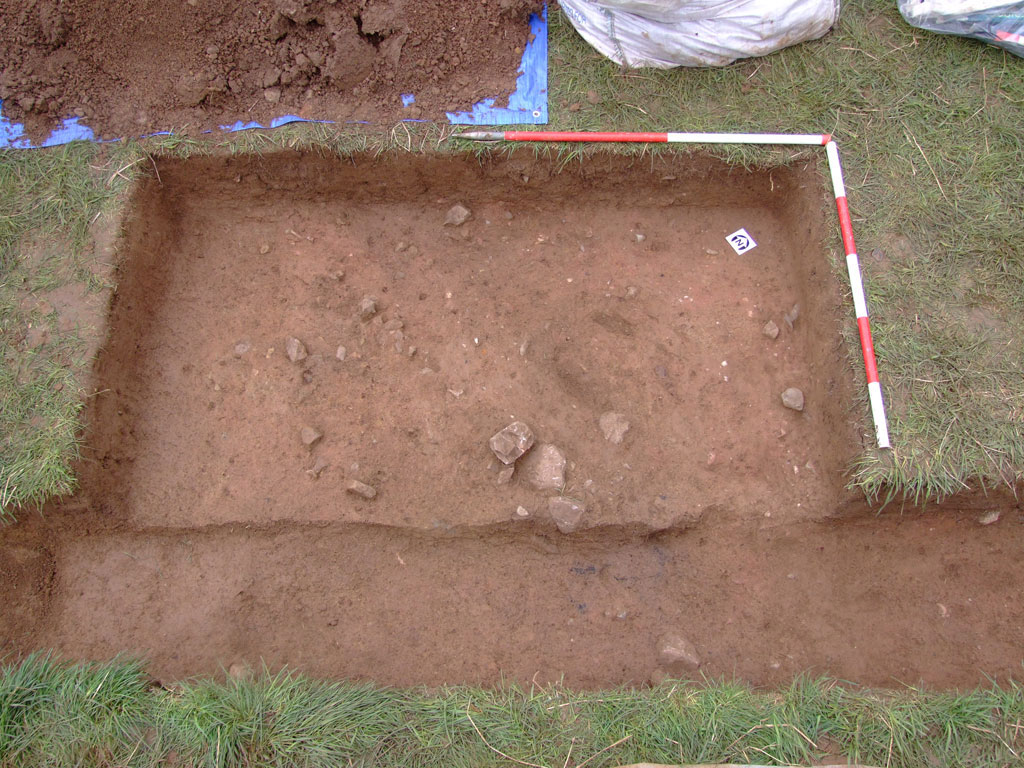 The features identified appear to reflect various phases of enclosure: ditches and lines of palisades or box ramparts over a potentially 1000 year period. Only one feature, Ditch 2, remains undated, although clearly it predates Ditch 1. It may be that Ditch 2 could be linked to post-hole Group 1, simply on proximity, although of course it could date to any other period.

The radiocarbon dates from both seasons indicate five broad periods of activity:

As there is a slight overlap between the dated activity of Phases 4 and 5 it is possible that they represent one period of activity, although for the sake of argument it is assumed that they are not. On this basis, the dates clearly indicate a shifting pattern from light defence to open settlement to more heavily defended settlement, although both the duration and nature of the associated activity within the various phases of enclosure are unclear. There is of course a final phase of undated activity, the backfilling of Ditch 1. The absence of both 18th or 19th century pottery from the fill of the ditch and the site from any 18th or 19th century maps, suggests that it was backfilled before this point and the homogenous nature of the ditch fill indicates that it was rapidly backfilled, but at present there is no indication of when it was undertaken. Although, it seems more likely that such an event took place in antiquity, certainly the absence of any organic stabilisation layer in the ditch fill indicates that it may have happened within a generation of its construction.

The overall sequence at Sheriffside contains many of the elements detected at other enclosed sites in East Lothian (Haselgrove 2009), for example Late Iron Age scooped settlement which could either be open or associated with an enclosure; Early to Late Iron Age defences; the refortification of existing sites in the Roman Iron Age. However, there are a number of key differences: for example the majority of the palisades excavated and dated in the Traprain Law Environs Project are Late Bronze Age in date, although the example from Standingstone did have an Iron Date that was dismissed by excavator as intrusive (op cit, 60). In addition, no single site appears to have had multiple phases of enclosures from the Early Iron Age to the Late Roman Iron. In addition, with the exception of Dunbar (Perry 2005, 25; Haselgrove 2009, 231), no other de novo ditches were dug in East Lothian during the Roman Iron Age. These differences do not contradict the established sequence but certainly establish the potential for previously unknown complexity to reside in unexcavated sites. Certainly more detailed examination of the comparanda reveals interesting patterns.

For example, the Dunbar ditch is less than half the size of Ditch 1 (Perry 2005, 25), presumably this can be taken to mean that Sheriffside was a significant location in the Roman Iron Age to Early Medieval period. The absence of Roman finds from the site, is echoed at other contemporary sites, with the exception of Traprain Law (Haselgrove 2009, 231), and certainly raises interesting questions about the function of the Sheriffside enclosure in this period.

We would like to thank Eric Glendinning for suggesting the site and allowing access onto his land, the technical support of the Edinburgh Archaeological Field Society with their geophysical expertise; the advice of the East Lothian Council’s archaeological team; and volunteers of all ages who helped make this possible.